We were lucky enough to have received some generous funding to help rebuild our Scout Hut. The rebuild replaced the roof and side walls, wrapping the building in warm insulation and providing efficient modern heating, and providing a new kitchen, toilet facilities and semi-sprung floor

Changes to the hut

The roof came off and was replaced alongside new guttering. The new ceiling inside has energy efficient downlighters and plenty of insulation and some sound deadening to reduce the echo.

The original concrete panel outside wall and breeze block inside walls down each side come out and werereplaced with a rendered wall further out on the outside and wooden cupboards and insulation on the inside. This made the hall slightly wider inside and gain lots of storage space but was primarily designed to reduce the energy needed to heat the hall up, so that it gets warmer quicker and more cheaply.

Heating comes from an ambient air heat pump which efficiently heats the air in the hut quickly and cheaply. The kitchen will be revamped and will finally have running hot water! The 1960's segregated toilet facilities were replaced with three unisex cubicles, one of which will be enhanced for disabled use, and there will be hot water taps on the sinks not just cold once the boiler goes into the new kitchen.

The office and stores weren't changed, but they benefitted from a redecoration. The hut will stay basically the same shape and size (about 2ft wider and longer) on its existing concrete plinth; the new walls now extend to the edge of this base rather than standing inside of the edge.

To keep more of our generous funding back for extra goodies in the hut we ran working parties to carry out some of the easier (and less dangerous) tasks to help shrink the labourer budget. We passed the word out to parents and were humbled by the offers of help. Plenty of safety equipment was available, and copious amounts of tea and coffee alongside home-made flapjacks and shortbread kept everyone's energy levels up.

The first working party removed the ceiling lights and the plasterboard ceiling, ready for a professional team to tackle the outer roofing material. This contains asbestos but is stable provided it is removed properly, but by removing the plasterboard below it the access for these relatively expensive professionals is better, which means they can finish quicker and therefore more cheaply. We also took out the windows, stacking them neatly to go back in later, removed the piping for the old heaters that had been capped off for us, and the guttering. 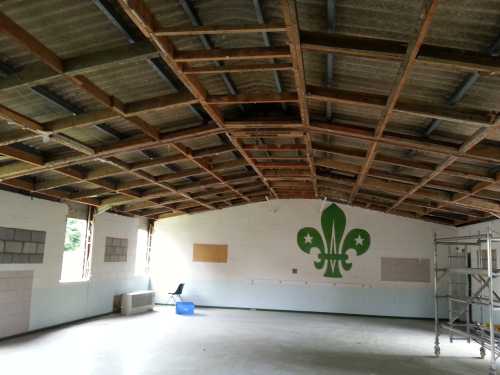 The outside walls were taken down by professional demolition contractors because of the asbestos mastic used to bond the large concrete slabs. Each panel was cleaned and made safe but left alongside the concrete slabs, blocks and pillars pretty much where they fell. 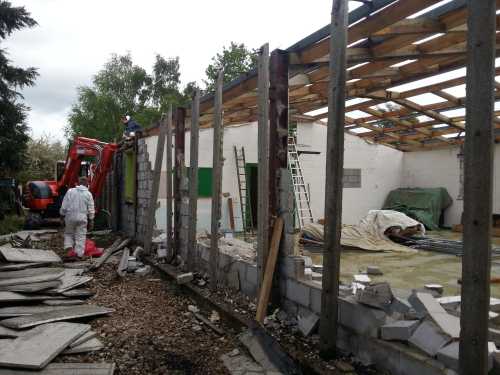 The second working party then swung into action. As well as chipping out the remaining breeze blocks, the main task was to move all the panels, blocks and rubble the demolition created out to the front of the hut where a grabber lorry was able to reach it to cart it away. All seven tonnes of it! Much tea was needed that day!

Work started on the interior walls in the new toilet facilities, and the stud work that will support the new outside cladding and insulation. Delays in the roof material supplies, due in part to changing specifications from the building inspectors, meant the new roof didn't go on as quickly as we had planned.

The roof has now gone on and the walls are being clad with a weatherproof outer skin. Insulation consisting of sheeps wool has gone in inside the walls to keep the hut nice and snug. The air based heating should now be able to bring the hut up to temperature much quicker than the old gas heaters and the insulation should keep it that way as well as reducing our heating bills.

The sheeps wool insulation was installed and held in place by sheets of wood with round cleats over them. This was then covered with a waterproof render.

The interior was worked on too. The end wall had to come down as it was unsafe and is being replaced by timber, which makes it warmer. The duct work went in for the heating system and you can almost (but not quite) make out the large heat pumps up in the loft space that reclaim heat from the outside air very efficiently and pump it into the hall making it warmer quicker and more cheaply than the old gas heaters (and without the safety worries).

The floor was next to go in - oak planks should be warmer and more gentle on those who wish to run (or dance) about than the old 1970's lino on concrete. Also added were the inside cupboard doors down each side wall - these make a series of eight cupboards (some of which are made available to regular hall users). Hidden away near the fire door is a slot for a couple of curtains - one for archery and one to enable the end of the hall to become a rudimentary stage.

We formed a working party to help clear the hall ready for the floor to be laid. Several tonnes of bags of render bond and top coat needed to be shifted outside plus the scouting detritus that stayed in the hall needed sorting through and either saving in the stores or disposing of.

The walls all went up, joined and filled, and the hall was cleared ready for the floor to go down. The solid oak planks in the right of the left hand photo were laid one by one and then sealed over three days - three coats of oil taking 24 hours each coat to soak in and seal.

We made it into the hall! The beavers raced up and down on the new floor testing their blowable 'sparklers' they had made, and the cubs had their first grand howl in the new hall, saluting the flag hooked over a hastily arranged plank and tied to something at hand. The hut came up to temperature in around ten minutes and we had to turn it down after the cubs played their long-awaited first game of Dodgeball and all overheated!

There was still stuff to do inside, such as skirting boards, covers over the heating ducts, a proper pulley and cleat for the flag, fitting out the other two toilets, redecorating the office and fitting and commissioning the kitchen. Outside the two stage render went on and a lick of paint (with a giant logo on it) and some etched front door glass went in but even before these happened the hut was very usable. It is warm, well lit, not too noisy and lovely.

After the horrendously wet start to the year we are finally able to get the rendering done. The stars you can see in the left hand picture form the centre of the two side trefoils of the large scout fleur-de-lys symbol painted on the front; they are the ducts for the toilet fans! The rope is painted with alterating black and green segments; the colours from our necker.

Dampness seeped up through the floor and its sealant somehow and caused the beautiful flooring to expand enough to make it ripple. Large sections had to come up and be replaced but all of that heart-aching and back breaking work has now been done and the hut is warm, well sealed and cosy.

It took a while to fitting out the kitchen and complete the disabled toilet. We have fitted a storage cage outside for the gas cylinders we take on camp with us so they can be safely and securely stored outside where they won't add to our worries should the hut ever suffer a fire. We have also landscaped some of the front space to smarten it up a bit and added some bike stands. 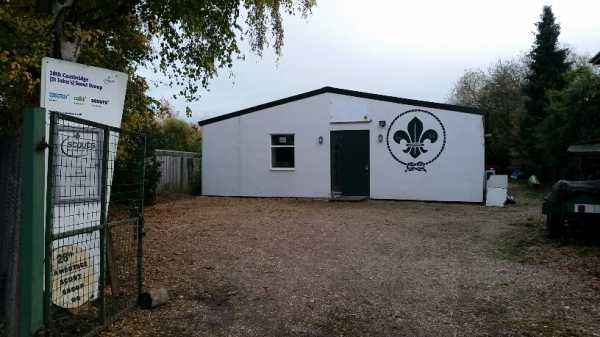 Our hut is now complete and we are loving the warm dry welcoming space it gives us!